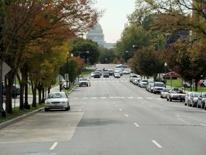 The District Department of Transportation (DDOT) has conducted a safety evaluation along New Jersey Avenue, NW between H and N Streets, NW, to determine improvements necessary to address existing safety and traffic operational deficiencies within the corridor. Upon completion of this evaluation, engineering plans for safety and traffic operations improvements within the corridor were developed to implement the recommended alternative.

The project was developed and designed based on the Mount Vernon Triangle Transportation and Public Realm Design that recommended converting New Jersey Avenue to two-way operations. In early 2008, engineering on the Mount Vernon design proceeded to a 65 percent level of completion. At this point, the project was put on hold for a variety of reasons, including a different geometric concept prepared by DDOT.

Recently, the project was reinstituted to address safety concerns in the corridor and a scope was developed to conduct alternatives analysis to identify opportunities to reallocate right of way space for other modes including transit vehicles, cyclists, and pedestrians. The design includes the following elements: