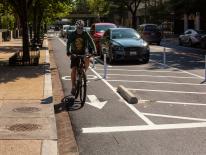 Bicycling has long been a part of the transportation mix in the District of Columbia. In the late 19th Century and early 20th Century, bicyclists, pedestrians, buggies, and streetcars all shared District streets. Today, bicycling still makes DC one of the most livable cities in the country.

The Department of Transportation has a well-established and very successful Bicycle Program that is committed to providing safe and convenient bicycle access throughout the city. Evidence of the program's efforts is visible on a great number of streets across the District.

Established by law and appointed by the DC Council, the Bicycle Advisory Council advises the Mayor and city government on bicycling issues.

The Bicycle Advisory Council meets on the first Wednesday of odd-numbered months. Meetings are held in room 1117 of One Judiciary Square (441 4th Street, NW) from 6 to 8 pm. All meetings are open to the public. Check with the Bicycle Program Manager to confirm the date and location.

Whether you are looking for a relaxing ride, commuting route to work, or just going out doing errands, the user-friendly Washington DC Bicycle Map will introduce you to the District’s extensive bicycle network of cycle tracks, new Capital Bikeshare stations, bike lanes, bike routes, trails, and safety information.

On average, 265 bicycle and 600 pedestrian crashes are reported to the Metropolitan Police Department each year in the District of Columbia.

There are two online options for finding bike routes in DC. Google Maps offers directions by bike, and Ride the City is based on Washington, DC Bicycle Map. Not only will both online route planners help bicyclists get from point A to point B, but Ride the City will show bike shops and bike share stations that exist along the way.

The two online resources are generated by a private web service. Please report any problems you find with the route suggestions directly to the providers. Cyclists are cautioned to follow all traffic laws. DDOT assumes no responsibility for damages resulting from the use of this data. No warranty of accuracy or completeness is expressed or implied.

The District Department of Transportation (DDOT) Bicycle Facility Design Guide – Version 2 serves as an update to the original guide published in 2006. Since its original publication, much has changed in the realm of bicycle facility design.

The guidelines presented in this document are based on the Manual on Uniform Traffic Control Devices (MUTCD), the American Association of State Highway and Transportation Officials (AASHTO) Guide for the Development of Bicycle Facilities, the Federal Highway Administration (FHWA) Separated Bike Lane Planning and Design Guide, and the National Association of City Transportation Officials (NACTO) Urban Bikeway Design Guide and Urban Street Design Guide. These guidelines also reference and adhere to the 2019 publication of the DDOT Design and Engineering Manual.