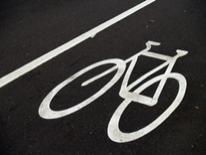 The purpose of the Downtown Bike Lane Pilot Project is to improve bicycle safety and access in the downtown area while maintaining the transportation function of downtown Washington. This is particularly important as DDOT expands to a larger, regional, bike sharing system of more than 1,100 bikes by the end of the year. These bike lanes are also included in the Bicycle Master Plan. Bike lanes are important in our objective of expanding transportation choices in the District and the region.

DDOT has identified approximately 22 miles of roadway to install bikeways (i.e., bike lanes, cycle track, or shared lanes). Most of the projects are either in the planning or design phases; both of which include opportunities for public outreach. Several projects are ready for installation including: bike lanes on Alabama Avenue SE and Stanton Road SE; filling bicycle gaps in existing bike lanes on 13th Street NW and Kansas Avenue NW; and a contraflow bike lane along 8th St NW.

More roadways are being studied and analyzed for the inclusion of bikeways and not all ongoing bicycle projects are included in this list and map. Therefore, if you do not see something on the list or map, please contact Mike Goodno or Will Handsfield with any questions.

DDOT has completed the evaluation of the innovative bicycle facilities installed in 2010 on 15th Street, Pennsylvania Avenue, and the intersection at 16th/U/New Hampshire. The study began in May of 2011 and concluded the following spring. The results are being used to make improvements and help with the design of other similar projects, such and the L Street and M Street cycle tracks downtown.

DDOT completed the final draft of a study to identify opportunities for continuous and consistent east-west bicycling accommodations through the NoMa and Mount Vernon Triangle areas. DDOT is accepting public comments on the report until July 31, 2018.