Mayor Muriel Bowser is working to make streets safer across the District, and the Mississippi Ave SE Protected Bikeway and Safety Improvements Project is an important piece of that commitment.

What is a Protected Bikeway?

Protected bikeways are facilities for bikes, scooters and other mobility devices which are physically protected from moving traffic by a tough physical barrier – curbing, rails, timbers – with vertical reflective delineators. Protected bikeways allow users of nearly all ages to enjoy safe bicycle, scooter, and other forms of travel through an area without any conflicts with motorized vehicles.

Characteristics of protected bikeways include:

Mississippi Ave runs along the Oxon Run Stream Valley, which already has a multi-use trail west and south from 13th to nearly Oxon Cove. The long-term trail plan is to connect Southern Ave. and National Harbor with a continuous trail. Today, this trail facility does not extend east of 13th Street SE. To continue the trail through the tract of forest requires significant, environmentally challenging work. In the fall of 2018, DDOT completed a Mississippi Ave. SE safety study at the request of ANC 8E, and found significant speeding issues on the street, and as part of that, traffic calming measures like speed humps and raised crosswalks were scheduled for installation. This street runs past several schools and recreation centers where children are present and need better protection from traffic. Additionally, the expansion of THE ARC in recent years presents an opportunity to connect the Oxon Trail and residents along it to an excellent community center. Using the southern side of Mississippi Ave, DDOT can add nearly a mile to the trail network, connecting residents on both sides of the area to all the resources to which the trail system connects. 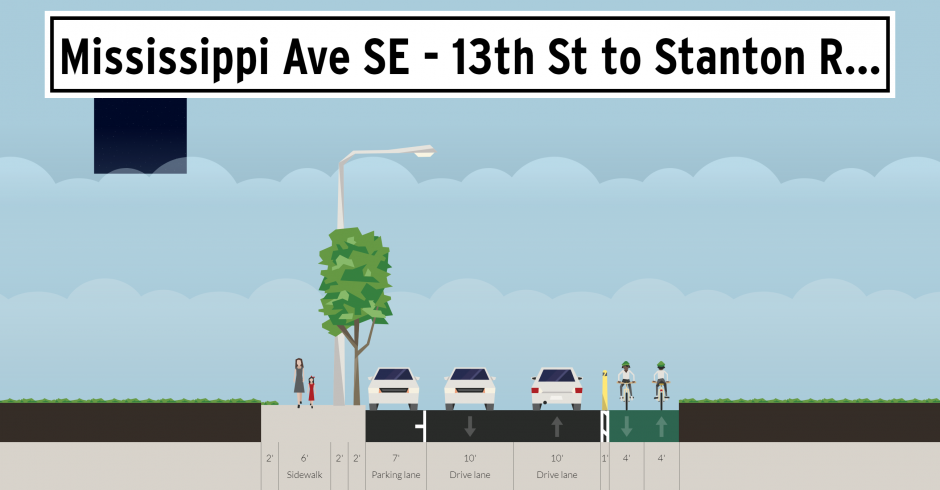 When did this project start?

This project has been in development by DDOT since 2010 when the Oxon Run Trail Plan was completed. In January 2019, DDOT added this segment to its annual work plan. Some of the safety improvements, -- (speed humps and raised crosswalks -- have already been installed. The bikeway portion of the project was presented at the April Ward 8 Traffic Safety meeting at the Bellevue Library, and notice was sent to the ANC in April 2019 of DDOT’s intent to install in 2019.

Currently, Mississippi Ave. SE has two 18-foot wide travel lanes, which are far wider than what is necessary. This project will reduce lanes to 10-feet wide. On the south side of the road, a 2-way, 8-foot wide bikeway will be built, separated from traffic by a 1-foot buffer. On the north side, there will be a standard 7-foot wide parking zone. Additional traffic calming elements – like speed humps and enhanced crosswalks -- will increase safety for all users of the roadway.

Will it affect parking?

DDOT will sanction parking on the north side of Mississippi (currently it is unregulated) between 13th Street SE and Stanton Rd., where possible. This will aid in slowing cars down in the corridor due to the reduced travel lane width.

Yes. The city has a growing list of protected bikeways, though this will be the first in Ward 8. They have proven popular with cyclists and neighbors and preliminary evidence suggests they reduce overall crashes in a corridor. Also, because of the additional traffic calming work as a part of this project, the DDOT expects the average speed of vehicle traffic on Mississippi Ave. SE to decrease and retain a safe, neighborhood environment not just for bicyclists but for children and pedestrians.

Where can I get more information on this project?