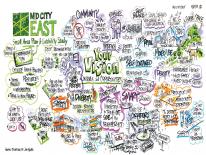 WINNER of the Harold Foster Award for Distinction in Community Outreach and Engagement, APA, National Capital Area Chapter, 2014
The Mid City East Livability Study was unique in that it was developed in concert with the DC Office of Planning’s Small Area Plan for Mid City East. A small area plan is a formal amendment to the city’s Comprehensive Plan that specifies the vision, objective, and specific actions for a focused area of the city. Whereas the Livability Plan is intended for near-term action, a Small Area Plan is a long-range vision (which includes near and long term strategies and recommendations).The majority of the Livability Plan will be incorporated as a near term action of the Small Area Plan, however the Small Area Plan will extend further in objectives and actions over time.
The neighborhoods of Mid City East – Bloomingdale, Eckington, eastern Shaw and LeDroit Park and the communities around the former Truxton Circle – enjoy a central location in the District of Columbia, proximity to the downtown and U.S. Capitol, a premier bicycling and recreational trail, and a general wealth of transportation choices. The neighborhoods have rich historic and cultural resources, attractive community parks and two of the city’s finest educational campuses. New retail and entertainment offerings continue to arrive providing more choices and amenities to local residents making Mid City East a growing community of Washington, DC.

The purpose of the Mid City East Livability Study was to address the day-to-day transportation challenges that residents face in meeting their daily needs, enhance community access and circulation (e.g. walking and bicycling) for residents of all ages and abilities, protect local streets as the “home zone” of neighborhoods and communities; and provide opportunities in the public rights of way to celebrate community identity and place.

After consulting with local residents, community leaders, and agency partners, four primary objectives arose as the central foci of the livability study:

The Final Report was completed August 2014. It is a comprehensive summary of the work done and conclusions reached during the study.