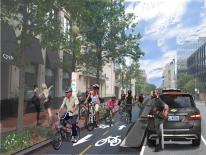 The District of Columbia is a compact city with relatively short distances between residential and commercial areas. For city residents, bicycling is often the fastest way to travel between home and the store, work, school, or other destinations.
The 9th Street NW Protected Bike Lane will provide a safe, continuous, separated bicycle facility between some of the densest and fastest-growing areas of DC, connecting residential, retail and institutional land uses with the downtown core.
The neighborhoods north of downtown, including U Street and Shaw--which have seen increased development and population--have shown bike commuting trips in excess of 10 percent of total commuting trips. The District as a whole has seen the number of people commuting by bicycle quadruple in the past 10 years. This increase can largely be attributed to the District's addition of nearly 20 miles of protected bike lanes since 2010, as well as the incorporation and expansion of Capital Bikeshare and substantial increases in the availability of public and private bicycle parking.

The 9th Street NW Protected Bike Lane project is driven by a need to connect central DC neighborhoods to downtown, as well as existing east-west bicycle facilities, and is identified, in moveDC, the District's long-range transportation plan, as an important goal for bicycle infrastructure.
The project began in 2015 as a feasibility study of multiple north-south corridors, from Pennsylvania Avenue on the south to Florida Avenue/ U Street on the north. At the end of the study in 2017, DDOT identified 9th Street NW as the preferred route. The 9th Street NW alignment provides the safest low-stress bike facility with the least impact to other roadway users, including transit, parking, loading, pick-up/drop-off, and vehicle traffic.
The design located a two-way protected bike lane on the east side of the roadway. The parking lane remains and is located adjacent to the protected bike lane.
North of Massachusetts Avenue, NW

The project was included in the Mayor's 2022 budget for final design and construction. After initial community engagement began in 2018, DDOT restarted public engagement in the summer of 2021 to meet with area stakeholders, including ANCs, businesses, residents, and institutions, to explain the project plans and gather feedback that will inform refinements to the design.