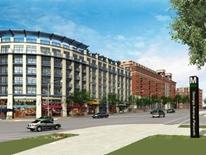 New development around the Georgia Avenue/Petworth metro rail station is anticipated to create additional trips to the area. While many of these trips will be served by metro rail and bus, it is possible that the land use changes will also increase pressure on surrounding on-street parking resources.

Approved mixed-use developments along Georgia Avenue from Otis Place NW to Upshur Street NW are expected to bring at least 47,500 square feet of retail and 350 new residential units to the corridor.

Residents in the immediate neighborhood have expressed concern that on-street parking spaces are becoming increasingly difficult to find.

A total of 30 block faces were reviewed for this study along Georgia Avenue from Otis Place to Upshur Street, which included one block east and west of Georgia Avenue plus the 3700 block of 9th Street behind the Park Place Development and the 4100 block of Kansas Avenue behind the 4100 Georgia Avenue mixed-use building to include a new Yes! Organic Market. The study area consisted of residential only, mixed-use, and commercial blocks with varying regulations and signage.

The study team found that the Georgia Avenue corridor lacks a cohesive regulatory parking system. Many blocks do not have consistent or uniform signage, and several regulations are outdated and do not match the adjacent land use. Detailed information can be found in the technical appendix.

Parking supply, when observed, appeared to be adequate on most blocks in the study area.