A critical link in the District’s roadway network and part of a bourgeoning area of the city, Florida Avenue, NE is a complex corridor with multiple land uses, varying roadway conditions, and important transit connections. The corridor serves as the main street for the Gallaudet University campus and residents of Wards 5 and 6, as well as an increasingly popular regional destination following the development of Union Market and the NoMa business district.

For more information about this project, please visit www.floridaaveproject.com.

In 2013 and 2014 the DDOT conducted a multimodal safety and planning study focusing on the Florida Avenue corridor from New York Avenue to H Street/Benning Road, the study evaluated safety, streetscape, and operational enhancements to improve safety for pedestrians and bicyclists while ensuring all users have safe access within and through this important corridor. This study sought to effectively balance the transportation needs of all users of the corridor. 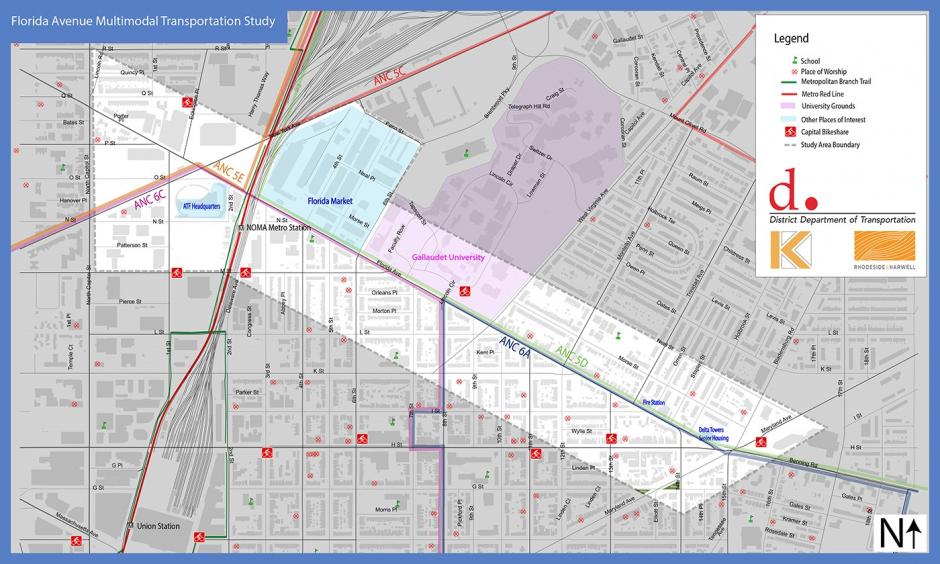 The Final Study was published February 2015.

The final recommendations identified areas of focus for preliminary engineering design including:

The design for Florida Avenue NE repurposes an existing travel lane in each direction between 2nd Street and West Virginia Avenue NE to facilitate widening the existing sidewalks and construction of a two-way protected bikeway on the south side of the roadway. Between West Virginia Avenue and 14th Street/H Street NE, the design includes bump-outs at intersections, widened sidewalks, addition of street trees and streetlights, and installation of new traffic signals. 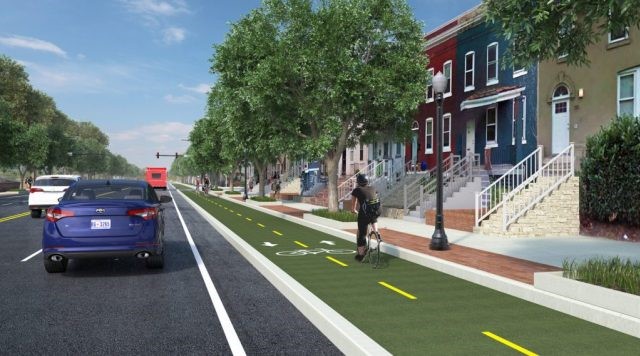 The 30% Design for the Florida Avenue NE Project was presented to the community in May 2017.

The final design and construction of the Florida Avenue NE Multimodal Project is fully funded in Mayor Bowser’s budget and is a priority project for completion towards the District’s Vision Zero commitment. The final design stage was given Notice To Proceed in May 2019. This phase is expected to take approximately 16 months to complete, during which time there will be additional DDOT meetings to present the design and update the community on progress of the project. Following the final design, the project will begin construction procurement and is projected to break ground in Spring 2021.

Mayor Bowser is committed to providing safe streets across the District, and completion of the Florida Avenue NE Multimodal Project is an important piece of that commitment. While the fully-funded project is in the final design phase, Mayor Bowser has directed DDOT to implement interim safety improvements along the corridor to bridge the gap between the existing conditions and the final capital project.

The Interim Safety Improvements for the Florida Avenue NE corridor will be installed between 2nd Street and 14th Street/H Street NE. The purpose of the interim improvements is to address safety concerns along the corridor by reducing vehicle speeds, improving pedestrian crossings, and providing protected bicycle infrastructure.

The proposed interim safety improvements consist of repurposing an existing travel lane in each direction between 3rd Street and West Virginia Avenue NE to facilitate designation of a center turn lane and addition of a two-way protected cycletrack on the south side of the roadway, as shown in the 30% design plans for the Florida Avenue NE Multimodal Transportation Project. The left-turn lane will reduce the need for lane changes around turning vehicles, reduce pressure on drivers making left turns, and smooth traffic flow in the general travel lanes. In addition, reducing the number of travel lanes overall will improve pedestrian crossing safety and slow travel speeds along the corridor.

An existing travel/off-peak parking lane in each direction between West Virginia Avenue and Staples Street NE will also be repurposed to facilitate designation of a center turn lane/parking lane and one-way protected bike lanes on the north and south sides of the roadway. The proposed cross-section will reduce the number of travel lanes for pedestrians to cross, improving pedestrian safety. The elimination of the part-time second travel lane in each direction will make it easier to use the on-street parking spaces, as well as reduce speeding and aggressive passing behavior in this portion of the corridor.

DDOT held an Open House on Thursday, June 20th at New Samaritan Baptist Church to present the designs for the Interim Safety Improvements. The interim improvements are expected to begin construction in July 2019 and will be completed by September 30, 2019.