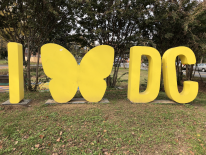 This project builds on DDOT’s collaborative processes with communities, government agencies, and stakeholders, which started with the 2011 Far Northeast Livability Study and continued with the 2013 East Capitol Street’s Pedestrian Safety Study. These studies included collection of safety data, evaluation of existing conditions, and development of conceptual recommendations. This segment of East Capitol Street accounted for the fifth highest pedestrian and bicyclist fatality rate of all arterial roads from 2010 to 2014, and therefore was prioritized for safety improvements in the Mayor’s 2015 Vision Zero Action Plan. The preliminary design of the East Capitol Street Safety and Mobility Project is now in progress.

The proposed improvements for Benning Road include:

The proposed improvements for Central Avenue include: