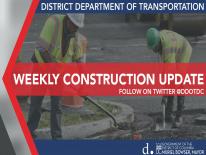 The 2022 Paving Plan is published on the PaveDC website with the start of the construction season. The website also includes separate tabs for sidewalks scheduled for repair and the Alley Restoration Plan for Fiscal Year 2022. For more information about these projects, please visit DDOT's interactive tool, PaveDC.

As part of DDOT's commitment to improving and restoring local sidewalks, construction activities will occur at the following locations throughout the next two weeks.

DDOT is improving alleys across the city. Once work begins, access to parts of the alley under construction will be closed, and parking will be restricted. In emergencies, access may be permitted by notifying DDOT. Work is estimated to take about two weeks, weather permitting.

DDOT preventive maintenance and repair of guardrails and impact attenuators occur at the following locations throughout the next two weeks.

As part of DDOT's commitment to improving and restoring Highway Structures, Preventive maintenance for bridges and other Highway related structures will occur at the following locations throughout the next two weeks.

If you live near any project areas, please remove your vehicles by the posted times, and encourage your neighbors to do the same.