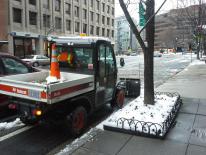 During this time, if conditions allow, the bike-lane team may clear the Metropolitan Branch Trail. DDOT clears 6th Street, NE; 15th Street, NW, and Pennsylvania Avenue, NW, with a light plow or Toolcat since these streets are wide enough to fit light plows. Then, DDOT clears First Street, NE, and L and M Streets, NW, with the Toolcat because it has a narrower 6’ blade that fits in these narrower lanes. The Metropolitan Branch Trail is also cleared of snow with the Toolcat.

The unprotected bike lanes are cleared along with the general travel lanes. Snow from these bike lanes are pushed back as far as the plow driver can safely push the snow off the lane. DDOT is mindful of how far the snow can be pushed before the potential for damage to parked cars rises. Because these bike lanes are between general motor vehicle travel lanes and curbside parking lanes, drivers are advised to shovel snow on, under, and around their cars onto the planting zones of sidewalks (the area between the curb and the sidewalk where trees are generally planted) and not the roadway.

If there are specific bike-lane locations that residents are having problems with, DDOT encourages them to contact 311, either by phone, online (http:/311.dc.gov/), mobile app or Twitter @311DCgov to report these locations. Alternatively, residents can feel free to Tweet @DDOTDC with the hashtag #snowonbikelane with the address, and DDOT will check on these, and clear them as much as it can.