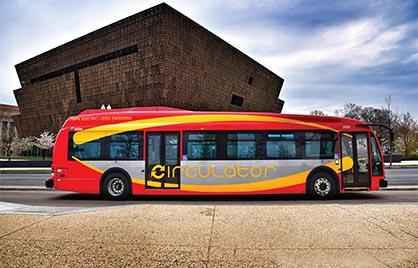 (WASHINGTON, DC) – Today, Mayor Muriel Bowser announced significant increases in DC Circulator ridership during February and March, a two-month pilot to offer free DC Circulator service to all riders. During these two months, there were 20,000 more riders in February and 77,000 more riders in March compared to the same months last year. Comparisons in ridership show a six percent increase between February 2018 and February 2019 and a 20 percent increase between March 2018 and March 2019.

“By making the Circulator free, we’re putting money back in the pockets of residents, we’re incentivizing the use of public transportation, and we’re thinking outside the box about reducing congestion on our roads,” said Mayor Bowser. “A free DC Circulator is one more way we are building a greener, more sustainable, and more equitable DC.”

In February 2019, Mayor Bowser announced that she was making the DC Circulator free as part of Fair Shot February. In March, the Mayor extended free rides for an additional month and also announced that her Fiscal Year 2020 budget proposal includes $16.1 million to make the zero-fare policy permanent and to expand the system’s routes into Ward 7.

“We have already gotten on board with supporting our public transportation network and building on its significance to the lives of all DC residents,” said District Department of Transportation Director Jeff Marootian. “Mayor Bowser’s proposed investments will ensure the DC Circulator stays free and connects citizens with entertainment, opportunities, jobs and a pathway to the middle class.”

The budget also includes $122 million for a new K Street NW Transitway and $240 million for new streetscaping projects, including the reconstruction of “Dave Thomas Circle.” Learn more about the Mayor’s Fiscal Year 2020 budget proposal at mayor.dc.gov/2020budget.