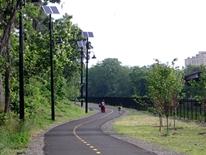 The Recreational Trails Program provides grants to nonprofits and funds to the District to develop and maintain trails and trail-related facilities. Nonprofits and community members are welcome to submit requests for trail funding or projects to the Recreational Trails Program Advisory Committee. The advisory committee meets every other month to review applications, make recommendations and to review the status of ongoing projects. To have your trail project reviewed by the committee, please read and fill out the application information below.

The trail in Watts Branch Park (now Marvin Gaye Park) was first constructed 1978, based on a plan developed by community residents. At 1.6 miles, it is the longest city-managed trail in the District.

When complete, the Metropolitan Branch Trail (MBT) is an 8-mile multiuse trail that will run from Union Station in the District of Columbia to Silver Spring in Maryland. Following the Metropolitan Branch Line of the Baltimore and Ohio (B&O) Railroad, the trail passes through numerous vibrant and historic neighborhoods as well as connection to the National Mall. The MBT  is an important transportation route providing connections to homes, work, and play as well as access to seven Metro stations. Current plans include connections the area's trail network such as the Capital Crescent Trail, Anacostia Trails Systems, and integration into the East Coast Greenway.