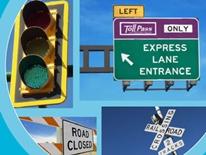 The MUTCD, which has been administered by the FHWA since 1971, is a compilation of national standards for all traffic control devices, including road markings, highway signs, and traffic signals. It is updated periodically to accommodate the nation's changing transportation needs and address new safety technologies, traffic control tools and traffic management techniques.

On December 16, 2009 a final rule adopting the 2009 Edition of the MUTCD was published in the Federal Register with an effective date of January 15, 2010. States must adopt the 2009 National MUTCD as their legal State standard for traffic control devices within two years from the effective date. The Federal Register notice, which provides detailed discussion of the FHWA's decisions on major changes from the 2003 edition, can be viewed at http://edocket.access.gpo.gov/2009/pdf/E9-28322.pdf (PDF, 716KB).

The current online PDF version of the MUTCD Manual 2009 with Revision Numbers 1 and 2 incorporated, dated May 2012 is the most current edition of the official FHWA publication.

On May 29, 2012, the hotlinks version of the 2009 MUTCD (PDF 31MB) was placed on the MUTCD web site to assist readers who use the electronic version of the MUTCD in navigating through the many cross-references that contained within the Manual. Hotlinks to cross-referenced chapters, sections, figures, and tables; pop-up definitions; links to external documents and web sites; links to official interpretations; and indications of material affected by known errors are all included in this version of the 2009 MUTCD (with Revisions 1 and 2 included). A description of how to use the additional features that are included in the hotlinks version has also been added to the web site.

On March 13, 2012, the FHWA issued a Directive, Policy on Sponsorship Acknowledgment and Agreements within the Public Right-of-Way, outlining the conditions under which Acknowledgment signing may be installed for the sponsorship of rest areas and other highway-related services. This Directive consolidates and expands upon information found in three previous policy memoranda. The Directive can be viewed in the Policy Statements area.

On June 15, 2011 the "Official Rulings" area of the MUTCD Web site was significantly enhanced and updated. The FHWA is still in the process of adding all official requests, especially those associated with Part 2. After all requests have been added, the FHWA will begin adding links to relevant documents for each request.

On October 1, 2010, Official Interpretation number 1(09)-1 (I) was issued, clarifying the definition of the term "Standard" and the use of engineering judgment and studies in the MUTCD.

On April 22, 2010, a Notice of Proposed Amendments was published in the Federal Register proposing to revise the 2009 MUTCD by adding Standards, Guidance, Options, and Support information regarding maintaining minimum retroreflectivity of longitudinal pavement markings. The deadline for comments to the docket closed on August 20, 2010. The Federal Register notice, which provides detailed discussion of the FHWA's proposal, can be viewed at PDF, 72KB and HTML.

The docket comments that were received are being reviewed to determine the most appropriate next step.