Grant and Sherman Circles have been included in several DDOT projects over the past years. Grant Circle was evaluated as part of the 2009 Pedestrian Master Plan, and in 2015 as part of a safety improvement project.

In 2016, DDOT completed the Rock Creek East II Livability Study. The livability study proposed several conceptual recommendations for both circles, including the removal of one traffic lane, the addition of a bike lane, green infrastructure improvements, and other treatments. The study noted that the recommendations would require further study, with an estimated time frame of 4-8 years.

From the community, DDOT heard about the need to improve safety at both circles and frustration with the long-term timeline. DDOT investigated what could be done in the short-term. 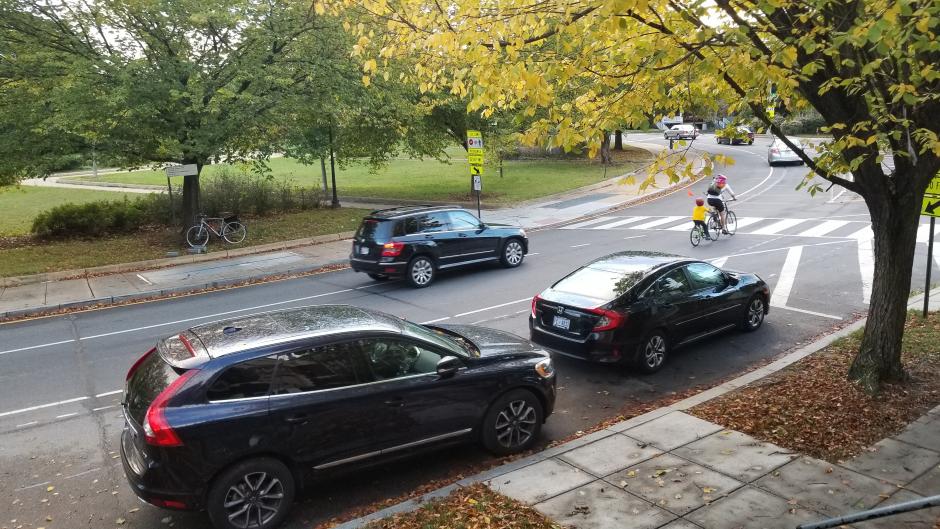 DDOT’s analysis of its traffic modeling suggested that a lane reduction would cause substantial queuing and delays. DDOT temporarily closed a traffic lane at Grant Circle for one week to test the modeling, and the analysis of data collected during the closure confirmed the model.

DDOT moved forward with a design at Grant Circle that retains two traffic lanes and includes several improvements, such as a bicycle lane with a buffer, narrowing the northbound New Hampshire Avenue approach to the circle to one lane, revised striping, shorter crosswalks, and new flexposts. DDOT completed the design and implemented improvements in November 2017. DDOT tested the effectiveness of the improvements by performing step-out surveys and noted a marked improvement in the number of drivers yielding to pedestrians in crosswalks.

DDOT’s analysis of its traffic modeling revealed that a lane reduction would cause no significant impacts to queuing and delays, and supported the feasibility of reducing Sherman Circle to one lane.

In response to community request, DDOT moved forward with a temporary closure of one traffic lane in Sherman Circle. The closure took place for three weeks in September, and DDOT collected additional data and conducted field observations during this time. DDOT also released a Notice of Intent for Sherman Circle to provide for a formal comment period for the proposed reduction of one traffic lane and other improvements.

During the lane closure, DDOT data analysis revealed minor increases to delays and queuing from some approaches. DDOT received a variety of comments, with residents split between supporting and opposing the closure of a travel lane at Sherman Circle. DDOT will be moving forward on a revised two-lane design for Sherman Circle, which is similar to what was installed at Grant Circle. The installation of these improvements is scheduled for May 2018.