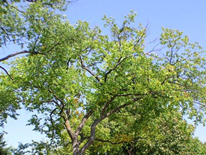 Dutch Elm Disease (DED) introduction into the elm population is devastating what was once considered an ideal American elm street tree—it was graceful, long-lived, fast-growing, and tolerant of compacted soils and air pollution.

Because elm is so well-suited to urban environments, it continues to be a valued component of the urban forest despite losses from DED. The challenge before us is to reduce the loss of remaining elms and to choose suitable replacement trees for the ones we cannot save.

Foliage symptoms: Symptoms of DED begin as wilting of leaves and proceed to yellowing and browning. The pattern of symptom progression within the crown varies depending on where the fungus is introduced to the tree. If the fungus enters the tree through roots grafted to infected trees, the symptoms may begin in the lower crown on the side nearest the graft and the entire crown may be affected very rapidly. If infection begins in the upper crown, symptoms often first appear at the end of an individual branch (called "flagging") and progress downward in the crown.
Multiple branches may be individually infected, resulting in symptom development at several locations in the crown. Symptoms begin in late spring or any time later during the growing season. However, if the tree was infected the previous year (and not detected), symptoms may first be observed in early spring. Symptoms may progress throughout the whole tree in a single season, or may take two or more years.

Vascular symptoms: Branches and stems of elms infected by the DED fungus typically develop dark streaks of discoloration. To detect discoloration, cut through and peel off the bark of a dying branch to expose the outer rings of wood. In newly infected branches, brown streaks characteristically appear in the sapwood of the current year.

It is important to cut deeply into the wood or look at the branch in cross section for two reasons: