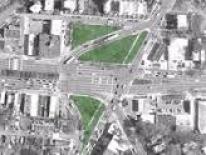 View a list of all printable DDOT maps [PDFs]

Commercial Use of Public Space

This map shows the commercial use of public space for businesses such as food and merchandise vendors, farmers' markets, valet staging, sidewalk cafes and food trucks.

The map contains locations and attributes of street lights, created as part of the District of Columbia, Department of Transportation (DDOT) Street Spatial Database (SSD).

This map shows the current and historic public space permits.

The District of Columbia created a citywide truck and bus route system based on engineering characteristics, roadway classifications, planner review, industry and community feedback, and field observations, which trucks and buses should use as long as possible until reaching their final destination.

This truck routing tool maps out the best routes for oversize/ overweight and large trucks traveling through the District. These mapped routes will factor in the District’s truck routes and restrictions, as well as the geometric constraints of vehicles up to 75 feet long and 80,000 pounds. To access the tool, click “Guest Access” when you are prompted to log in; then, as your origin, select your “Boundary Location” or point of entry into the District; next type in your destination; and finally press “Generate” for your route.

Find a DC location using a method in the link. Select the matching location from the list to show DDOT snow AVL status. Find out which areas have been plowed and salted.

Take a tour of Washington, DC's past and look at its plans for the future with this story map.

See the trail of recent street tree vandalism. View more than 750 street trees that were damaged during the rampage in spring 2014.

This map shows open sidewalk requests for service in and around the Georgetown Business Improvement District.

Pedestrian and bicycle collisions mapped by all eight wards in the District from 1997 to 1999.

DDOT works hard at making the District of Columbia one of the most bicycle-friendly cities in the country (dimensions 24x36", 2 pages).

Map of the DC Central Business District where bike riding on sidewalk is not permitted downtown.