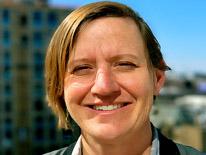 Linda Bailey is the Vision Zero Director for the District Department of Transportation (DDOT).

She joined DDOT in March 2019 from the National Association of City Transportation Officials (NACTO) where she served as Executive Director since 2014. In her role, Bailey worked with a network of transportation officials from large U.S. cities to develop strong national policies based on best practices in various aspects of transportation policy, including street design, bicycle infrastructure design, public space design, transit-supportive street design, and green stormwater design for city streets. Bailey led policy development, with significant work on the accommodation of autonomous vehicles and oversaw the launch and operation of NACTO’s Global Designing Cities Initiative as well as the development of six NACTO Designing Cities conferences in New York, San Francisco, Phoenix, Austin, Seattle and Chicago.

Prior to joining NACTO, Bailey worked for the New York City Department of Transportation where she played a key role in developing the agency's Vision Zero Program and helped deliver hundreds of millions of dollars in federal transportation funding. As a federal programs adviser Bailey shaped the city’s applications for special federal grant programs including the American Recovery and Reinvestment Act projects. Bailey began her career as a policy analyst focusing on senior transportation issues, federal transportation spending and the high cost of transportation for low income households.

Bailey holds a Bachelor of Arts and a Master of Urban Planning from the University of Michigan. She is a member on the Committee on Large Cities for the Transportation Research Board and a former board member of the Washington Area Bicyclist Association.